The next vorpX version isn’t too far away, time for a little progress update. Main focus this time was working on and finalizing a few features and improvements that were in the works for quite some time. Arguably the largest one being an integrated 3D engine with renderers for all three supported APIs. So this will work with each and every DirectX 9 to DirectX 11 game that vorpX is able to hook into, supported or not.

The 3D engine is used for two things: for one it superseeds the current EdgePeek mode that now works much more natural: doing this in 3D space allows you to look around the screen like you normally would (including positional tracking) instead of the current, slightly odd behaving 2D slide pixelshader trick. This alone would have been worth the effort. Watching cutscenes, using inventory screens etc. feels A LOT better this way.

The main reason for the 3D engine however is an additional new display mode, currently dubbed “Virtual Cinema” (may change for the release). This opens up vorpX for a lot of games that currently aren’t playable too well although they technically work with vorpX. Many third person role playing games, sports games, fun racers without cockpit view, strategy games, side scrollers etc., you name it. Each and every game genre that isn’t exactly a good match for the normal VR mode will now be playable on a giant screen in front of you. With head tracking and Stereo 3D for supported titles, of course.

Much work went into making this both a playable and visually pleasing solution. You will be able to choose from various scenes with or without an environment, and those of you who love to tweak things will be able to adjust a plethora of settings to your liking like screen aspect ratio, distance and curvature, lighting intensity etc.

Three things I’d like to talk about in greater detail. There would be a lot more to talk about, but this should be enough for now:

The vorpX 3D rendering has to be as lightweight as possible in terms of performance, after all you want to be able to run it on top of demanding games without it eating away too many fps. To still produce a nice and visually pleasing image all lighting is precomputed, yet still able to react dynamically to the game content in a very realistic way, including indirect lighting calculations. A Virtual Cinema mode environment reacts very, very natural to the screen content lighting wise, which adds a lot to the overall mood, despite the environment itself being extremely low poly for performance reasons. 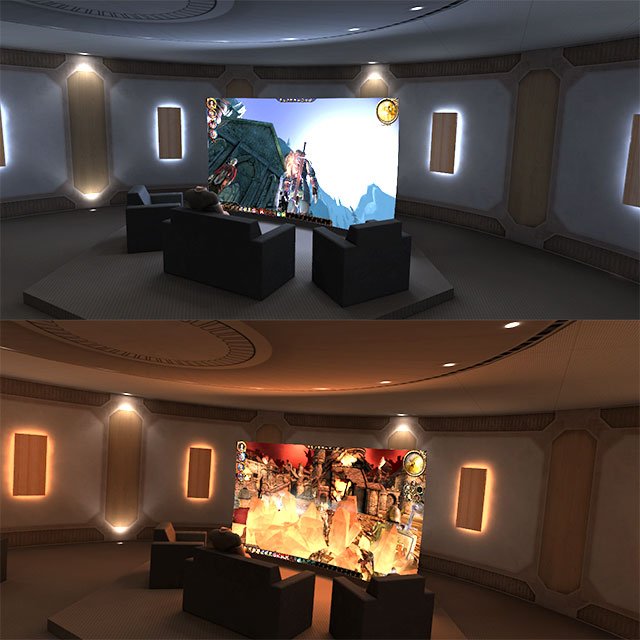 Sitting in a virtual armchair and playing games is great, I really came to love it, but it may not be everybody’s cup of tea. Virtual Cinema mode still has something in store if that is true for you. The most useful Virtual Cinema scene in that case is probably the Ambience Scene, which expands the game content colors into the peripheral part of the field of view around the virtual screen. Especially combined with a small screen distance this produces a very pleasing effect. A nice side effect is that with dialed down or turned off ingame head tracking this way you will be able to use a (kind of) decoupled walk/look play style in first person games. 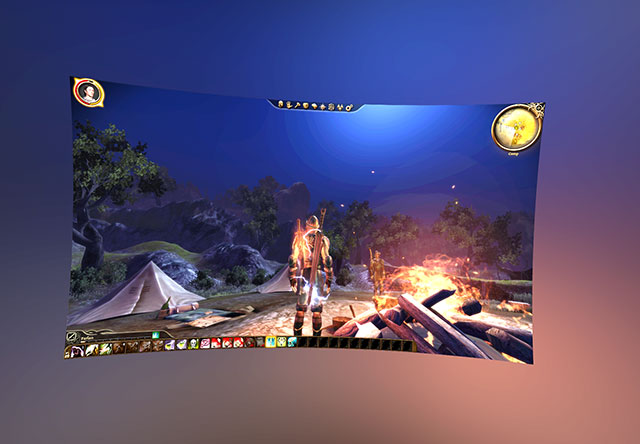 In Virtual Cinema mode the game content isn’t just applied as a texture to the virtual screen, rendered and sent to the final distortion shader, which would be the easy way to do this. Instead a deferred rendering technique is used that avoids the double sampling of the game content which would normally occur (and would produce blur). This deferred rendering technique provides an image on the virtual screen that is as sharp as possible. Sounds too technical? Let’s just say: the difference this makes is huge.

I could go on with a few more things, but that should be it for now.

PS: In case you are wondering: Additionally to the 3D-engine there will also be more supported games, some other new features, and of course a few inevitable bugfixes. Stay tuned.