Experimental No Man’s Sky Profile & What’s Up Next 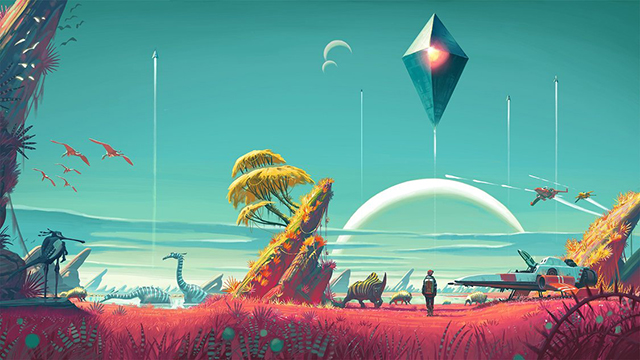 With the next vorpX version not far away it’s finally time for another “What’s Up Next” post. But before I come to that here’s a little bit of info regarding No Man’s Sky, probably the most anticipated game of the summer.

This one wasn’t really expected to work at all in 3D since it uses OpenGL graphics instead of Direct 3D. OpenGL 3D support is mostly limited to older OpenGL games with vorpX, but surprisingly No Man’s Sky works with full Stereo 3D. If you have a beefy gaming rig, exploring the beautiful worlds of this game in VR is simply stunning.

Some may take a more technical approach at defining what VR is for them, I however would almost go so far to say a game like No Man’s Sky experienced with a VR headset truly is the “true” VR. Exploring the sights and sounds of strange new worlds you could only imagine otherwise, immersed in a way that no TV or monitor could ever provide. With enough room left for your own fantasy, your own little stories, instead of just following paths laid out by others like in so many blockbuster games these days. Not much comes close to that.

Oh, where was I? – The profile and instructions can be found here. A more fleshed out version with automated Game Optimizer adjustments will be made available with the next vorpX version that will be out soon™. Which brings us straight to the second topic of this post:

Whats Up Next in vorpX

I’ll keep this brief, so you (and me) have more time to play No Man’s Sky. As always the next vorpX version will bring new features and enhancements. The most notable additions this time are:

Vive controller support with convenient ingame mouse/keyboard mapping similar to the vorpX gamepad mapper. Also comes with additional/optional gesture based movement. And since sometimes I like to waste a little bit of time for details noone will notice, controllers are discreetly lit by the environment color to better fit into the game visually. For those who are wondering: expanding this to Oculus Touch controllers will be easy once Touch is released.

Color correction: Being optimized for monitors some games look better on the headset with a little bit of extra color correction. With the next vorpX you will be able to adjust gamma (brightness) and saturation individually for every game easily in the vorpX ingame menu.

As always there are also a lot of smaller enhancements and bugfixes beyond the scope of this post.

Have to go now. I think I saw something I could use in that little cave beneath the purple hill over there at the end of the canyon. It’s a bit far though, hopefully my heat protection will last until I reach it. And fingers crossed that this elephant sized octopus-mushroom-hybrid-thing-whatever 100 feet ahead stays as calm as it is now…